Blackfish tells the rather dark story of an orca named Tilikum.  Tilikum and his pool mates at a marine park called SeaLand were trained using group punishment.  Tilikum as the newest orca was often raked by the other orcas when he didn’t get a behavior right.  Tilikum and his pool mates spent much of the day locked in small metal cages, with food deprivation used to lure them in.  After killing a SeaLand trainer, Tilikum was sold to SeaWorld and ends up killing 2 more people.

The backdrop to this includes the sad story of the capture of Pacific Northwest orcas.  Blackfish goes on to show a collection of dangerous human-orca incidents and orca on orca aggressions. These result in the death of another person and an orca.  The moral is that orcas shouldn’t be in captivity.  The intermixing of humans and orcas is fundamentally dangerous.  It’s best to leave them free and unmolested in the wild.

Often when you dig into an historical event, you find interesting complications.  The author must make editorial choices.  Blackfish is no different.  It has a complication, a significant additional story beyond what was presented.
During peak tourist times, there could be hundreds of people around the pool, and it was difficult to get to the pool wall.  During the winter months, there might only be a couple of visitors at the pool wall.  SeaWorld’s pool monitoring function seemed to be performed jointly by the tour guides and the fish concessionaire.  It was somewhat sporadic.
Friends did not feed the orcas in trying to buy a relationship.  Food was part of the orcas’ training regimen.  The orcas were also kept hungry so they would readily take the fish sold to visitors.   The orcas would take offered fish, but as soon as they cleaned out one visitor’s fish they moved to the next.  They stayed and played with those offering no fish, their friends.

Eventually, these orcas completed their training and began a life of constant performing.  Within a few years, they began to exhibit dangerous behaviors, logging the incidents noted previously.  These orcas went from a history of friendly and gentle behavior to being the major part of SeaWorld’s most aggressive and incident prone orcas.  Some of their children and grandchildren continue to show these tendencies. 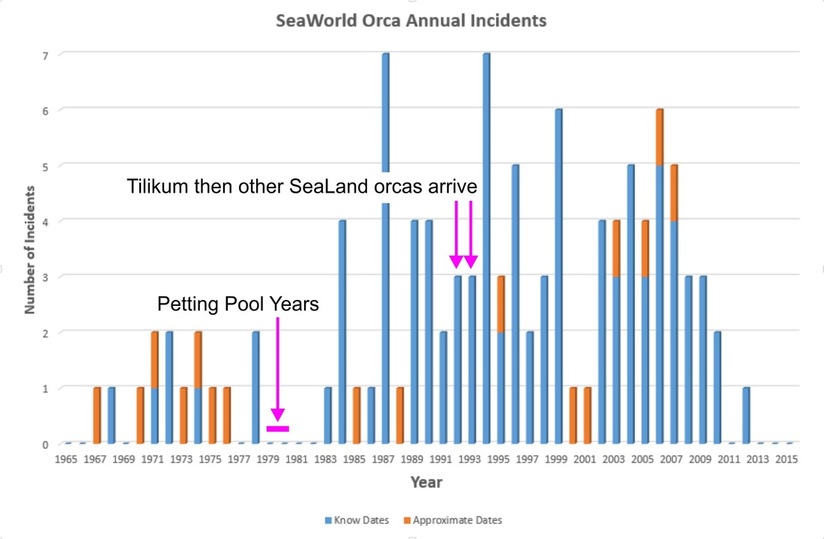 Many of SeaWorld’s orcas experienced growing from calves to young adults and some to full adulthood.  They became outsized for their pools.  They experienced a life of relentless performances.  Yet the majority of orcas have no logged incidents.  At least 17 passed through the hormone surge of puberty and beyond without any incidents. Among these are Kona 2 and Kahana who were captured along with the petting pool orcas.  They were sent to Orlando for training and didn't experience a petting pool.  They have no reported incidents, yet their experiences were identical to the petting pool orcas other than possible differences between Orlando and San Diego and not having been in a petting pool.

The orcas who were at SeaLand all have incidents logged.  One of Tilikum's 4 incidents happened at age 3, before he arrived at SeaLand.  ﻿Nootka 4 and Haida 2 were at Sealand years longer than Tilikum but show relatively few incidents.  Abusive environment does seemingly correlate to later aggression but not so strongly as the petting pool correlation.  Six of Tilikum’s descendants have logged incidents, but 4 of those 6 are also petting pool descendants.  Tilikum's incident at age 3 is unusual among orcas, as is his later deadly aggression.  All other orcas with incidents at age 3 and younger are petting pool or tank mate descendants. 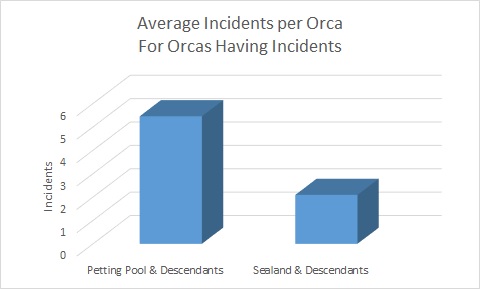 For comparison, 50% of SeaWorld's original Pacific Northwest orcas [including Winston who was also a petting pool tank mate] have recorded aggressions.  The average number of aggressions per PNW orca with aggressions is 2.43.


We can’t get inside these orcas’ heads, but the most straight forward interpretation seems to be that the orcas who had once experienced human friendship, respect, and trust were the most negatively affected by the accumulated effects of life in captivity.
___________________________

﻿The upside to this alternate story line is that a more fulfilling and positive relationship is possible between orcas and humans than Blackfish posits.  Humans and orcas can be quite good friends.

In the wild, orca pods for the most part benignly ignore humans.  Even given opportunity, orcas don’t hunt humans.  There are no instances of orcas killing humans and only one instance of an orca harming a human.  A major reason the orca capture industry worked is that orcas didn’t attack humans in the water even as their children were being kidnapped.  Once in captivity, orcas quickly became friendly to their captors, if only for a few years.

Even in the wild orcas occasionally have friendlier relations with humans:

• Solitary sociables, like L-98 Luna and A-73 Springer who got separated from their pods and sought out human friendships
• Dr. Ingrid Visser’s friendly but arm’s length relation with New Zealand pods
• Roberto Bubas’ relation with orcas off the coast of Patagonia
• The “Killers of Eden” Australia who for 90 some years cooperatively hunted baleen whales with humans during the days of hand thrown harpoons and rowed whaleboats

It is illegal under U.S. and Canadian laws for humans to fraternize with wild orcas.  The likely rehabilitation and release to sea pens of SeaWorld’s orcas provides the most substantial opportunity for establishing real friendships between humans and orcas.  This is a real opportunity for the two species to learn about and from each other.

Commentary by Howard Garrett, co-founder of The Orca Network:

Experience teaches. The newly captured orcas given free rein to meet and greet at will in the petting pools at SW San Diego in 1979-1980 had been violently grabbed from their families and taken away from their native waters off Iceland. We can assume they were treated harshly, like wild beasts needing to be trained. A few months later they met some friendly human companions at a petting pool. There they found that humans can be kind and curious, and willing to build trust over time. Genuine affection seemed to flow both ways over the walls of the pools.

Then the petting pool visits ended, and the only interactions with humans reverted to the systematic dominance of rigorous training schedules and being shunted from pool to pool, with food deprivation used as leverage to force behavior all day long.

But those companions at the petting pool had shown those few young captives that not all humans practiced domination. The precocious young orcas had learned that humans didn’t have to be like that.

These same orcas became the most hostile and aggressive of all the captives at SeaWorld. Did their experiences with their human companions at the pools teach them that humans were actually capable of being friendly, making the coercion practiced by the trainers seem just that much more onerous and frustrating? It’s always risky to try to look into the mind of an orca, but sometimes there are enticing clues to how they think, and the histories of those petting pool captives may give us a window into how they learn and process information.

Endnotes:
(1)  All references to orca incidents are based on the tables Here and Here.  If a more complete set of incidents is available, we will gladly use it for a re-look at this analysis.

(2)  It is likely that Kandu 5 spent time in the petting pool, but we don't have definitive proof as yet.  Kandu 5 and Canuck 2 were both captured in fall 1977 and both arrived at SeaWorld in Dec 1977.  They began training together and likely spent time in the petting pool. Canuck 2 certainly did.  Kasatka and Kotar arrived at San Diego in Oct 1978, then Kandu was sent to Aurora in Apr 1979.  It is possible that all 4 were being rotated through the petting pool.  At least Kandu and Canuck were tankmates and probably Kasatka and Kotar as well during their respective times in the petting pool.  Cetacean Cousins’ bio of Kandu 5 states, "Kandu probably spent some time at the "Petting Pool" along with other young orcas shortly after her transfer."

(3) "SeaWorld’s Most Rewarding and Traumatic Job" by Tim Zimmermann in "Outside Online", 19 August 2014, interviewing Jim Horton.

(4) An approximation for table entries indicating an indefinite number of incidents over an interval, like the early 1970’s.